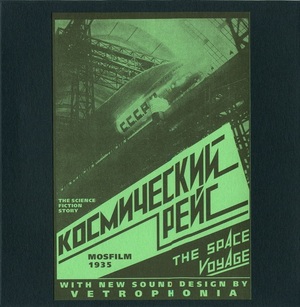 Label info: "The science fiction film "The Space Voyage" was first shown in Soviet cinema theatres in January 1936. [...] The film narrates about the bravery of young pioneers, the willingness of Soviet women to always come to aid, the fearlessness of scientists and their determination to sacrifice their lives in the name of science. [...]

The original film had a soundtrack compiled of various classical music compositions. But what can be more appropriate to the constructivist spirit of Soviet time than the retro-futurism of St. Petersburg's noise scene classics? The Vetrophonia duet consisting of Nickolay Soudnick (ZGA) and Alexander Lebedev-Frontov (Linija Mass, Stalnoy Pakt, Veprisuicida, etc.) solved this task with enthusiasm. During 2005 while working in the ZGA studio they laboriously collected samples, recorded the parts of electronic and acoustic instruments and composed collages for each specific scene of the film. The result turned out to be beyond all praise.

The DVD-R with the movie has an option of turning on English subtitles, comes with a booklet containing an article about the shooting process and is packed in a special cardboard sleeve.