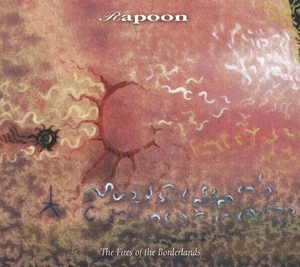 Rapoon - The Fires of the Borderlands 2CD (Zoharum)

Label info: It's been 16 years since the release of Rapoon's masterpiece entitled "The Fires of the Borderlands". It is arguably his best known work which is still much appreciated by both old fans of his music and new-comers to it. Long out-of-print and much sought after, this classic has now received a well-deserved expanded reissue treatment.

Originally, "The Fires of the Borderland" is comprised of 11 tracks full of evocative ambient sonic textures. These sounds generate images of desert lands somewhere in uncharted countries in Africa or Middle East suspended in time. It is a chronicle of those lands which was found buried in the scorching sands. You can almost feel the texture of it in every second of this album which conjures up ghosts of people from those lands with writhing snakes at their feet.

This special edition is comprised of two discs. The first is the main album which is mastered from the original tapes, therefore, it sounds significantly better to the 1998 version. The bonus disc is a 40-minute live recording for the San Francisco-based radio KFJC which again proves that Robin Storey has mastered the ability to creating haunting sonic atmospheres.