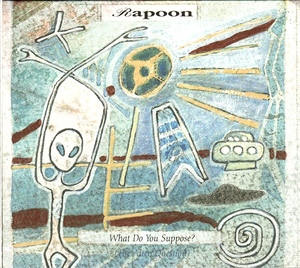 Rapoon - What Do You Suppose? (The Alien Question) / Project Blue Book 2CD (Zoharum)

The original album is built on extensive sampled speeches by William Cooper regarding the extraterrestrial presence on Earth, underground alien bases, Majestic 12 and other elements of UFO lore. The music augments and underlines these outlandish revelations with repetitive drum patterns and sustained tones, and at times it brings to mind some of the most memorable tracks by the Tape-beatles on The Grand Delusion that relied on a similar setup.

The extra disc is titled "Project Blue Book" and uses material from the original 4-track recordings and DAT mixes of the 1999 album. Less emphasis is placed on the sampled speeches and Rapoon's futuristic ethno-ambient resurfaces in completely different takes on the sound sources.