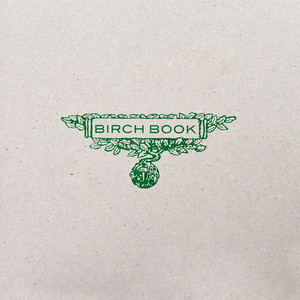 Label info: Aware of Birch Book's interest in French language and culture, Les Disques du 7ème Ciel suggested that they collaborate on the release of a record based on French song.

"As I remember, La Chanson de Prévert, a Serge Gainsbourg song that pays tribute to Jacques Prévert's poem Les Feuilles Mortes, was the first French chanson that I learned to play as a means to help with my studies several years back. Besides having some personal poignancy, I relished the seamless wordplay and 'homage to song' aspects.

Not long after, it seemed necessary, then, to disinter The Dead Leaves within the song. Having a weakness for obtuse games of letters, and in keeping with a certain metaphysical imperative, I then was unable to avoid the injunction to construct a 'meta-homage' in order to satisfy an eccentric inclination in expression of the senses and evolution of the genre." -Birch Book

This eponymous EP contains six tracks – a reworking of Life's lace, which originally appeared on his album A Hand Full Of Days, and five new ones.

It is all hand-made from 100% recycled raw paper. The package also includes a unique 100% embroidered Birch Book patch exclusive to the release.