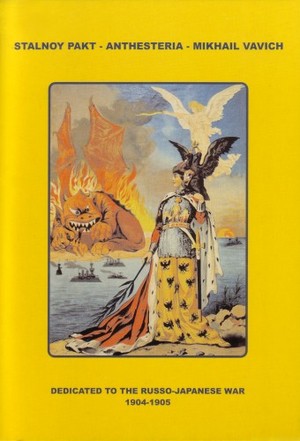 Label info: "This split release is a commemoration of one of the most tragic pages of Russian history in the 20th century - the Russo-Japanese War. This lost war became a deep scar in the national consciousness of that period and turned out to be among the most painful and powerful incentives for the following first Russian revolution (1905) and the further eventual decline of the Russian monarchy.

This CD is an attempt to revive the deep anxiety and the premonition of the upcoming relentless social shock which had overwhelmed the Russian nation in those times. Stalnoy Pakt presents maybe its most melodic tracks to date here, the distinctive band's multi-layered dark ambient fused with old military Japanese song samples and old Russian lyrical narrations, sometimes adorned with piano chords or martial drums. Anthesteria's cold gloomy tunes are combined with choir chants and gramophone record samples that aggravate the atmosphere of the dull waiting for the imminent disaster.

The album is concluded with an authentic historical recording of the classic track of the period called "Na Sopkakh Manchzhurii" performed by a very famous singer of that time, Mikhail Vavich. This funeral waltz dedicated to the victims of this war drives the overall feel of despair and grief up to the highest limit. The album could be compared to the best examples of historically inspired works but with its own very special and purely Russian depressive mood. An absolute must!"

Format: CD, A5 sleeve with inserts
Out of stock