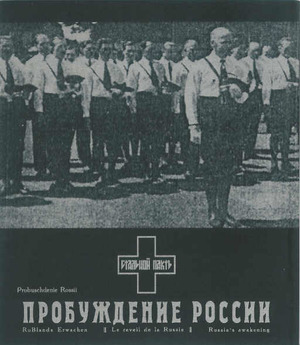 First full-length CD from Alexander Lebedev-Frontov's other main project. While Linija Mass takes its aesthetic inspirations from Futurism and Soviet socialist realism, here the focus is shifted to militarism and nationalism, possibly in a manner related to the kind that is re-surfacing in Russia these days.

The sound is closer to ambient / martial industrial, but whereas most Western European projects in this field aim to infuse themselves with a sense of often overblown heroic bombast, Stalnoy Pakt's take on the genre turns marches into dehumanized machine-like processions and hymns into oppressive drones. Utterly bleak and captivating.