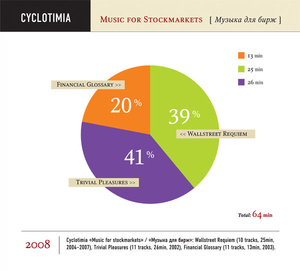 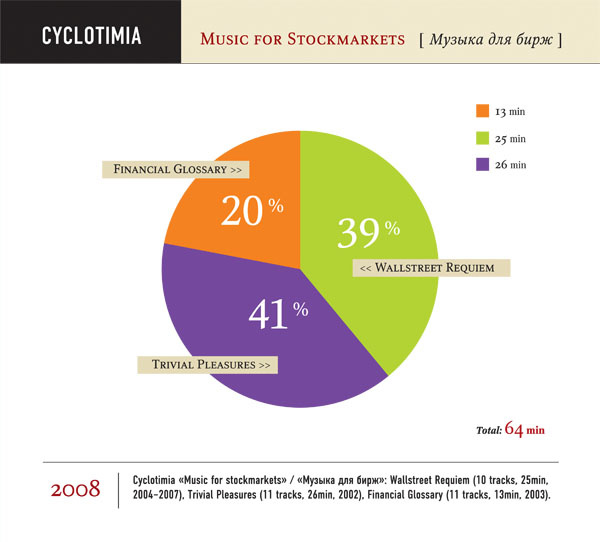 Label info: Cyclotimia is most probably the only project in the world which has chosen the creation of a soundtrack to "globalization" and life in the "consumer society" as their concept. The project members more than anyone else are immersed into the magic of finance and their creative intuition allowed them to compose the main part of "Music for Stockmarkets" with its unforgivingly precise name "Wall Street Requiem". Today the whole civilized world is listening to this requiem, the first cords of which were played in Wall Street itself.

The material itself is nothing like the one heard in the previous records of Cyclotimia. There are no apocalyptic soundscapes of "Wasteland" times, no cybernetic hi-tech and media madness of "E$chaton", no cosmic downtempo of "Celestis: Space Ceremonial Music"... Minimalism, academic sterility, surgical accuracy and meditative ataraxia prevail on "Music for Stockmarkets". Then again it is not the familiar "IDM", "glitch", "noise", "clicks and cuts" and not "minimal techno"... The sound of the album is crystal-clear and warm at the same time. "Vintage" lovers have a wonderful chance to listen to the masterpieces of Soviet music production (such as Rhythm 1, Rhythm 2, Aelita, Formanta UDS, Formanta EMS-01, Polyvox) in pure sound, unprocessed by effects.