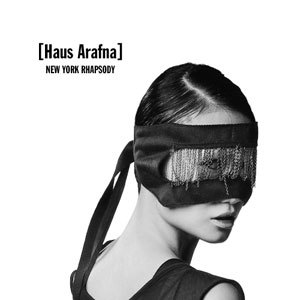 Haus Arafna being commissioned to write a soundtrack album for a New York fashion show seems about as comically mismatched an idea as the Grey Wolves headlining a Christian rock festival, but "New York Rhapsody" dismisses any initial apprehensions rather quickly. While the aggressiveness has definitely been dialed down to some extent to emphasize the more textural and constructed aspects, the ingredients - electricity-charged static, dour tones and metallic noises - are consistent with what you'd expect from the current sound of Haus Arafna. Secondly, the album's theme hardly constrains it musically or lyrically, and this isn't some dull scholastic effort with some tacked-on references to the catwalk or what have you. Ultimately little aside from the photos by Nikolay Saveliev (Levoi Pravoi) and the blurbs tie this album to fashion, and if anything it could be argued that it's more about New York at large ("45 Minutes in New York", "Ground Zero"). Overall, a very nice little surprise.