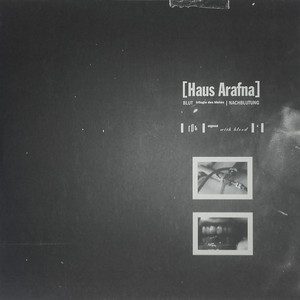 Label info: "Blut was Haus Arafna’s first Album. It first appeared in 1995 as a limited edition CD, was remastered and reissued in 2006 as CD with the inclusion of three bonus tracks (Nachblutung). Blut was never released as a vinyl version, this omission is now amended. Blut consists of three sections (Trilogie des Blutes), each side of the vinyl containing one section. The fourth side contains Nachblutung. The tracks have all been remastered, and lean acoustically on the original 1995 version. On Blut, classic "Old-School" Industrial is to be heard, there is only a vague hint of the Angst Pop movement to be ascertained. This Album is loved for its ecstatic violence and unbridled energy, right up to the present day."