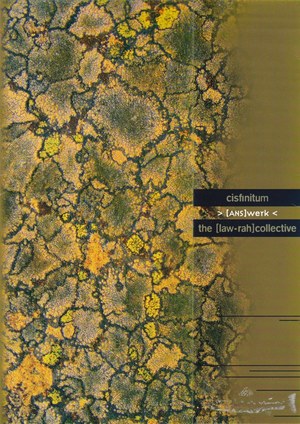 Label info: "Russian one-man outfit Cisfinitum and Dutch duo The [Law-Rah] Collective are both dark ambient masters. They dedicated this split and common work to one of the very first synthesizers in the world, the ANS.

The ANS, created by Russian engineer E. Murzin from 1937 to 1957, is an incredible response to the synesthesia theories (the letters ANS stand for Alexander Nikolayevich Scriabin who linked tones to colours). The ANS synthesizer (only one copy exists and is kept in Moscow) generates special frequencies from drawings ("it plays what you have drawn") and in the opposite it can also create a visible image of a sound frequency. Artists such as Coil, Edward Artemiev (for Tarkovsky's Solaris soundtrack) and Alfred Schnittke used the ANS in their compositions.

For this album, The [Law-Rah] Collective and Cisfinitum based their music on original sounds from the ANS as well as additional recordings of various analog synths, fractal and granular synthesis, voice, violin, field recordings."

Note: the 23-min track by Cisfinitum is an amazing composition of shimmering drones and ghostly melodies that is not be missed.