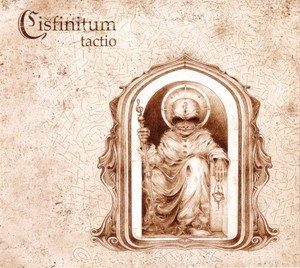 With a parsimonious discography mostly released on seasoned Russian labels such as Waystyx, Ewers Tonkunst and Monochrome Vision, Evgeny Voronovsky has established himself as a uniquely engaging artist in the country's current ambient scene. Under the name of Cisfinitum, he has taken a syncretic approach to an often codified genre, uniting his formal training as a violinist at the Moscow State University with his affinity for concrete sounds and experimental structures. Past releases have shown a capacity to synthesize these factors at times while emphasizing the contrasts between them at others, sometimes over the course of a single track. In this aspect, this album follows the tradition faithfully.

Tactio is the live recording of a Cisfinitum concert at the St. Petri Dom (St. Peter's Cathedral) in Bremen, on November 24, 2005. The particular (and as expected highly favorable) acoustics of this environment were consistently used not only as an enhancing effect but as an integral foundation for the performance, making it unmistakably tied to its context. Presented in the form of six continuous tracks, the album is a contemplative composition of vibrant drones, reverberating bells and synthesized resonance, gracefully evolving from the celestial tones of its start to the tellurian pulses of its climax. This is a piece of work that is elaborate in its simplicity, and it's with much appreciation that it is presented here today. The beautiful iconic artwork by Evgeny Kuprienko further emphasizes the relic-like qualities of this recording.