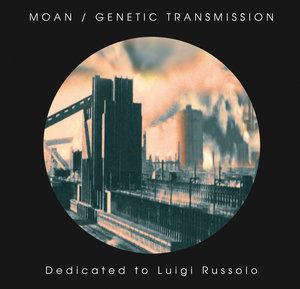 Label info: The fourth installment of the GT Archive Series is the split release by MOAN and GENETIC TRANSMISSION. Tomasz Twardawa and Rafał Sądej wanted to dedicate their music to Luigi Russolo, a composer who greatly influenced the creation of what we now call the urban music.

The album consists of two long compositions, one by each project, respectively MOAN (Men at Work) and GENETIC TRANSMISSION (Przebudzenie Miasta). Although artists perform in their own completely different way, their music on this album sounds very consistent. It is worth mentioning that the first composition was a sound installation during the exhibition "People at Work" which took place at the Museum of the City of Jawor in 2004. Originally, the material was released on CDR in 2004. Today, Rafał Sądej remastered his new CD version in 2017.