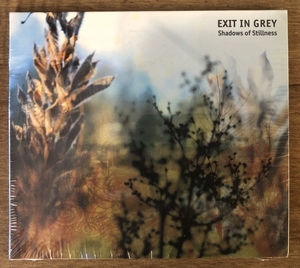 Label info: "Exit in Grey is one of the main musical incarnations of Sergey [S] from Moscow-area town Pushkino, who is also known for many other projects including Five Elements Music, Sister Loolomie and labels Still*Sleep and Semperflorens. Starting from 2004 Exit In Grey has released over a dozen of albums on CD-Rs and cassettes, mainly on his own label Daphnia Recordsand also on such labels as Mystery Sea, Abgurd and YAOP. His first factory-pressed CD "Perception" came out last year while "Shadows of Stillness" becomes the second album released in this format.

Exit In Grey has quickly developed it's own recognizable style - very calm, a bit melancholic drone ambient with gentle melodies and rugged textures made of found sounds. Four compositions of "Shadows of Stillness" follow the same path: harmonious currents of droning guitars and reed organ are framed by slow waves of resonances dissolving into each other, signals and loops crafted from field recordings, sounds of a Polyvox synthesizer and very long frequency radiowaves from the Earth's atmosphere and space bodies."