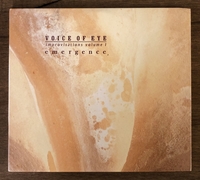 Compilation of material recorded between 2006 and 2007 by this much appreciated ambient/drone duo from New Mexico. The material presented here was recorded live without overdubs.

Split 2008 release from these two ambient projects that were still somewhat under the radar then, before they gained more prominence with their releases on Cyclic... (continued)

A much needed CD re-release of this cult 1988 tape from the Yugoslavian experimental underground. Apokrifna Realnost (or rather Aporea as it was known on the initial cassette) was one of... (continued)