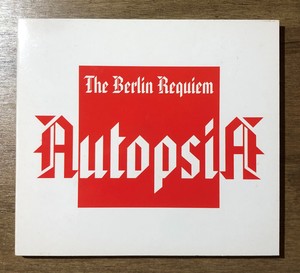 Label info: "Truly monumental in scale, a huge electroacoustic fresco.Symphonic orchestration bring forth a barrage of colossal sorrow. This is electronic music of exquiste tension and ecstatic release, moving from drones to explosive classically orchestrated peaks.
The album symbolically resurrected, though perhaps simultaneously buried, Breht and Weill's Das Berliner Requiem.
In the context of 'The Berlin Requiem', Brecht's 'Berliner Requiem' might be seen as a quotation in its entirety. In the initial ground of Brecht's poetic there is a concordance with the poetic of Autopsia. Otherwise 'The Berlin Requiem' wouldn't have happened at all. However, every similarity ends with this initial ground. Autopsia’s music is a hall of mirrors, each one distorting us differently."