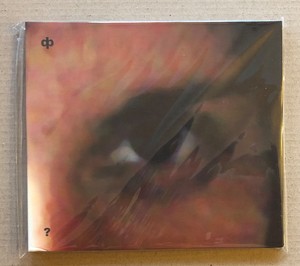 Label info: "Assembled between April and June 2009 as part of a therapeutic process during a period dominated by severe disturbances of loss, loss of selves, mental abysses and despair, "?" is the new gospel from Swiss experimentalist Dave Phillips, co-founder of grindcore legend Fear of God, a member of the sense perplexing Schimpfluch-Gruppe and the pulverizing force behind the Rudimentary Peni one-man-doom-drone worship act Dead Peni, among numerous other projects.

"?" offers a 79 minutes album of field recordings oriented compositions that feature murky cello, piano and accordion parts, nocturnal voices, a vast array of concrete snippets and more resonances of existences that give Albert Aylers' "Music is the healing force of the universe" new depths and meanings. "?" sees Phillips observing and carefully dissecting his human psyche into ten intimate and innovative music pieces, confronting them with the bile and degradation of the omnipresent while deconstructing his own ravage with a binding urge to cleanse. And it's a fascinating insight to listen to."