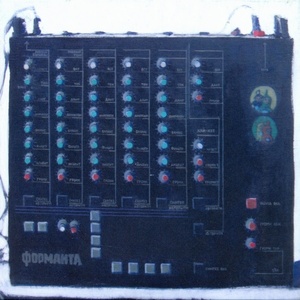 Label info: "Hladna and Kryptogen Rundfunk - behind these names stand two St. Petersburg-based musicians playing experimental noise music. They both nourish a tender passion for old electronic instruments and often use them at their concerts and on recordings. One warm sunny day they gathered and decided to play on two analogue rhythm synthesizers "Rokton" and "Formanta". These are actually two identical instruments which were produced in the Soviet Union by two different factories. Each of them is the "brain" for electronic drum-kit, but can also be used separately - as a multi-channel tone-noise-generator or rhythm-machine.
Kryptogen Rundfunk used his device smoothly, evenly and calmly while Hladna expelled from his more sharp and unpredictable sounds. Worth mentioning are Hladna's non-standard ways of making sound - on the last two tracks he opened the back plate of his synth and played not only using knobs but also getting inside and abridging contacts with his own hands (for which he was incidentally struck by the current a couple of times).
Live recording without any processing, with all it's natural crackles and tasty overloads. Abstract electronics, minimalism and a little noise."