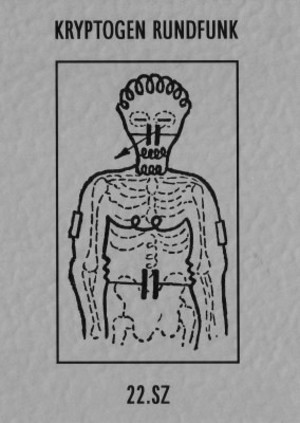 Those of you that have been paying some degree of attention will already know Kryptogen Rundfunk from his split with Rupor Udara released not that long ago. The EP provided an opportunity to hear some key elements of his pet sounds: pulsating drones, low-key rhythms and more importantly, the mass of dense radio noise that has even become incorporated in his own label's domain name.

Recorded mostly in 2002, 22.SZ was scheduled to be self-released on Zhelezobeton, but delays due to other productions happily made it end up in our hands. Using gritty radio textures, shuddering digital noise and subdued rhythmic structures, this debut album elegantly combines simplicity with satisfaction. The layered sound hums and sizzles with the soothing quality of a crackling power line, achieving the glowing warmth of an electrical fire.

Judging from some of the reactions received during Kryptogen Rundfunk's live shows, there is indeed a sensuous aspect to the sound, a calm and seductive side that gently seeps into your senses with the flowing static. 22.SZ is your chance to treat yourself to it.