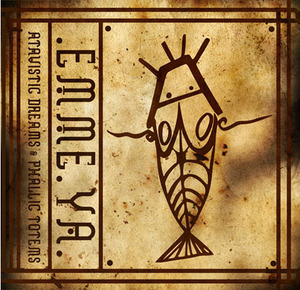 Label info: "40 minutes of dense astral emanations and magickal paradigms transmitted through the ritual mantras generated by Emme Ya. Emme Ya’s 'Atavistic Dreams & Phallic Totems' is based on the mysterious African Dogon tribe and their secret oral tradition. In the 1930s two anthropologists gained their trust enough to be told these remarkable secrets. The Dogon seemed to possess advanced astronomical knowledge beyond their means, without any instruments. They revealed that the star Sirius was orbited by the 'smallest and heaviest of all stars' and drew its elliptical orbit, which spans 50 years. This white dwarf (Sirius B) is so invisible that the first image was only obtained by scientists in 1970. But the Dogon also told of a third star in the system named Emme Ya (now Sirius C). This was only discovered in 1995 and only with the use of advanced infrared imaging. The Dogon say that their information was given to their ancestors through contact with beings from the star system of Sirius, calling these beings Nommos or 'the monitors of the universe'."