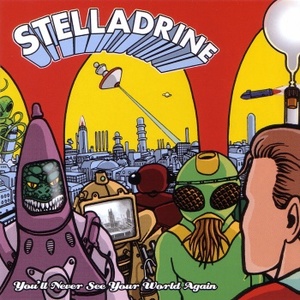 There is a reason that the 50's are referred to as science fiction's Golden Age on the silver screen. After all, what other era has so prominently featured such a vast bestiary of mad scientists, bug-faced monsters and fearsome aliens? It was a time when inverting polarities and shutting down generators were all the rage, and square-jawed heroes in jumpsuits led the way across the unknown. A time when science was alternatively mankind's ultimate salvation or its impending doom. A time when the future meant something.

"You'll Never See Your World Again" is a sonic journey to this future. Theremins whistle and sing, electronic equipment bleeps away and rocket engines whir in this exploration of what lies beyond the blackened expanses of space. In this case it happens to be fifty minutes of melodic cosmic ambient, catchy lunar beats and space-age guitar ballads, and that's without even mentioning the manic robo-surf rock of the second track. Gorgeously adorned by STPo's colorful artwork, this is an invitation to all adventurous cadets out there.