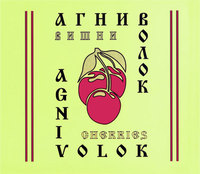 Originally planned to be released a few years ago as "Cherries for the Golden Skull", this album has finally surfaced through the efforts of Israeli label The Eastern Front. As... (continued)